Everyone's done it. Dropped something on the floor, quickly picked it up, wiped it off and eaten it. But is the "Five Second rule" really a rule?

The common theory is that if we pick up food dropped on the floor quickly enough, it’s safe to eat. Although many people are firmly believe in this urban legend of a rule, many others use it to convince themselves that it's OK to eat food accidently dropped on the floor.

Know as the ‘five-second rule’ or even to some as the ‘three-second rule’. Whichever you're familiar with it isn’t based on science.

There is an idea that dirt is 'good for us' and hygiene is somehow 'unnatural' is every increasingly being popularised in the media.

For those who believe that a little bit dirt never hurt anyone, each year in the UK there are around a million people o suffer a food-related illness. Of those million, around 20,000 people require hospital treatment and as many as 500 may die.

The most sobering thought is that many of these cases could be avoided through basic food hygiene like hand-washing, and preparing and cooking food properly.

To order to disprove the “5 second rule” a microbiologist from the University of London, Dr Ronald Cutler, subjected the myth to scientific testing.

The experiment involved dropping commonly dropped food (like pizza, apples and buttered toast) on different surfaces synthetically contaminated with food poisoning bacteria. This was to emulate what would happen if you dropped food onto a contaminated surface.

The aim of the study was to determine whether the time food was left on the surface affected the how the contaminated the food was.

The food samples were then analysed and results showed that all dropped food was covered in germs compared when compared to control samples that hadn’t been dropped.

Samples were dropped on the contaminated surfaces and picked up after 0, 5 and 10 seconds. Even after zero seconds each sample tested was heavily contaminated.

The results showed that the five-second rule no effect on the amount of bacteria picked up from a contaminated surface.

Dr Cutler experiment proved that it doesn’t matter if it’s in your home, on carpet, or the kitchen floor… if you’ve drop it, bin it.

How to Prepare and Cook Food Safely

How to store Food Safely

How to use leftovers safely 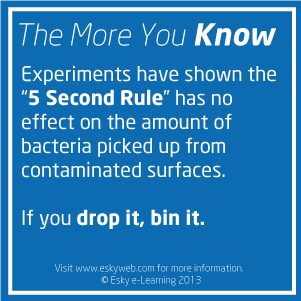